As anyone who has ever watched a local television meteorologist can tell you, the weather isn’t always easy to predict. The atmosphere is a maddeningly complex, chaotic system, and even the best forecasts involve some level of uncertainty. Fortunately, the basic mechanisms of the weather are relatively well understood, even if the results aren’t always predictable. The goal of this Meteorology 101 series is to provide a basic understanding of those processes, which will aid in the ability to forecast the weather and diagnose it as it happens.

Although we generally don’t recognize it, we live at the bottom of a vast ocean. Unlike the liquid water that makes up the oceans we’re familiar with, however, the Earth’s atmosphere is composed of many onion-like layers of air. This air, despite being a gas rather than a liquid, still behaves in much the same way as any other fluid. This invisible ocean of nitrogen, oxygen, argon and other trace gases flows, compresses, pools and deforms as it travels around the Earth, and the science of meteorology is an attempt to understand and predict these motions and their results.

As with any fluid, the atmosphere constantly seeks stability. In an ideal world, the air would be the same temperature and humidity throughout the entire atmosphere. Of course, we don’t live in an ideal world. Solar radiation, the rotation and tilt of the Earth and other factors ensure that stasis is never reached. The weather can be thought of as a great engine which seeks to rid the atmosphere of this imbalance and return it to a state of equilibrium, and throughout this series we’ll look at various ways in which it does this. But first, let’s examine how this imbalance originates.

Although the atmosphere is a continuous body of air, it is composed of many smaller air masses. An air mass is a volume of air that has roughly the same temperature and moisture content throughout. There are four primary types of air masses, named by where they originate. “Continental” air masses are so-named because they originate over large land masses, and they tend to be drier. “Maritime” air masses originate over large bodies of water and tend to hold more moisture. These air masses are further defined by their temperature, with “tropical” air masses having a higher temperature than “polar” air masses. Taken together, the four air mass types are continental tropical (cT), continental polar (cP), maritime tropical (mT) and maritime polar (mP). A fifth air mass, continental arctic (cA) contains dry, bitterly cold air and is seen much less frequently in the middle latitudes. 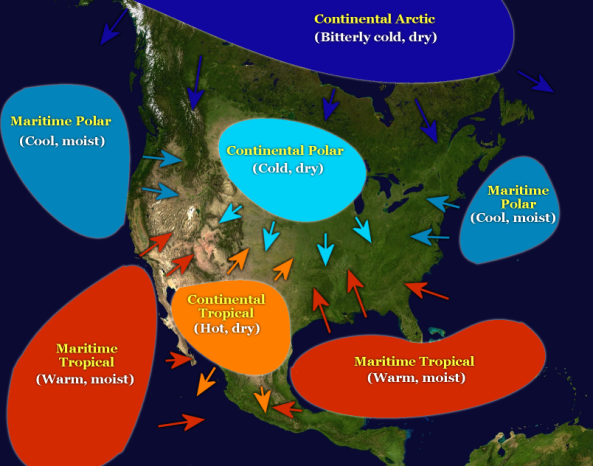 Common positions of the various air mass types across North America. Arrows represent the most common directions of flow for each air mass.

These air masses move like large tectonic plates across the globe and, like the earthquakes that result from the collision of two plates, most large-scale weather occurs when two air masses collide. The meeting of two air masses is called a front, and the type of front depends on how the air masses are interacting. Because the majority of widespread weather occurs near fronts, they are a key factor in understanding and forecasting storms. Below are the types of fronts as well as the weather that is normally expected along them. Below each header is the symbol used for each front on surface analysis maps.

Cold fronts occur when a mass of cold air moves into and collides with an existing mass of warm air. Because cold air is denser than warm air, the cold air mass drives underneath the warm air mass like a wedge, lifting it higher into the atmosphere. The warm air mass eventually rises high enough to begin condensing, forming clouds and rain. The cold air strongly forces the warm air to lift upward, often leading to thunderstorm development or heavy snow in the winter. For this reason, the majority of severe weather occurs near cold fronts.

A warm front occurs when a warm air mass moves into an existing mass of cool air. Because the warm air is already in motion and the cold air is stationary, the warm air lifts above the cold air with much less force. This leads to much less energy for storm development and often causes steady, prolonged rain and occasionally weak storms instead. Because warm fronts move much more slowly than cold fronts, rainy conditions generally persist for a longer period of time.

When warm and cold air masses meet and neither has enough force to move the other, a stationary front is formed. Along the front, the lifting is very weak and storms are rare as a result. Because stationary fronts move very little, they can cause steady rain or snow over the same general area for many days. Many flooding and heavy snow events are caused by stationary fronts, which are sometimes referred to as being “stalled” over an area.

An occluded front is the most complex of the various fronts. When a swiftly moving cold air mass overruns a slowly moving warm air mass, it can sometimes wedge completely underneath the warm air mass and begin mixing with the cool air on the other side. When this happens, the warm air mass is cut off from the ground, or occluded, and is is lifted further into the atmosphere. Weak lifting may cause widespread clouds, as well as rain or snow and occasionally storms.

As we mentioned briefly earlier, one of the primary causes of the imbalance that drives the weather is solar radiation. Because of the tilt and rotation of the Earth, its surface isn’t heated evenly. This, in turn, causes the air masses above these cooler and warmer areas to also become cooler or warmer because the temperature of an air mass is determined largely by the temperature of the surface beneath it. In addition to contributing to the different thermal properties of the air masses, this uneven heating also influences the surrounding air pressure.

Air pressure is essentially a measure of the weight or thickness of the atmosphere above any given point. A thicker volume of atmosphere is heavier because it contains more air molecules, and vice versa for a thinner volume of atmosphere. Temperature affects the pressure of a mass of air by expanding or contracting it. As a mass of air becomes warmer, it becomes less dense and begins to rise and expand. The air high in the atmosphere begins to flow away from the rest of the air mass as it warms and expands, leaving less air beneath and creating a lower air pressure. Conversely, a cooling air mass contracts and becomes more dense, allowing additional air high in the atmosphere to flow inward, adding additional weight to the air mass and creating higher pressure.

As air rises in a low pressure system and flows outward high in the atmosphere, more air near the surface rushes inward to fill the void. This air is also ultimately lifted upward and dispersed, acting as an engine or pump that continues to run until the surrounding atmosphere is no longer imbalanced. The same mechanism works in reverse in a high pressure system, where air flows outward near the surface and more air rushes inward in the upper atmosphere. The air in the upper atmosphere then flows downward toward the surface, called subsidence, until it too eventually reaches the surface and flows outward. However, this inward and outward flowing air does not flow in a straight line. Combined with friction from the surface, the Earth’s rotation imparts rotational energy to the air, called the Coriolis force. 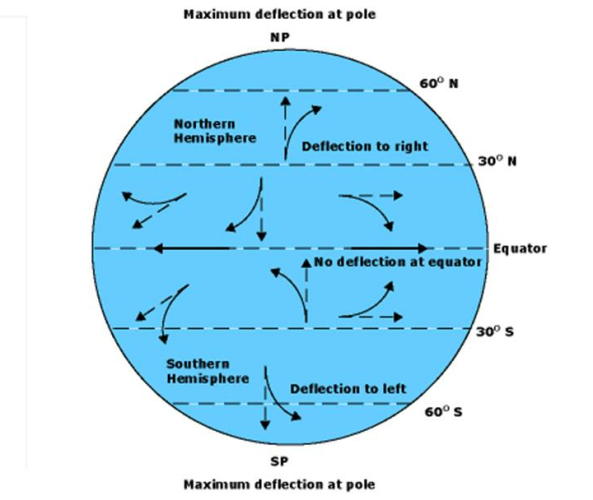 The Coriolis force causes wind to be deflected, imparting rotational energy. The diagram shows the direction of rotation for each hemisphere. 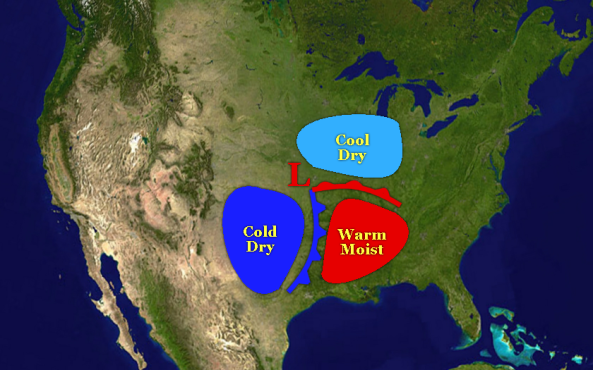 A typical low pressure system with its associated air masses and fronts. The air from each air mass flows inward toward the area of lowest pressure, indicated by the “L” on the map.

One final piece that often plays a role in severe weather, particularly in the Great Plains, is a dry line. A dry line is a semi-permanent boundary that often separates the warm, moist air mass across the southeastern and central United States and the hot, dry air mass originating from the desert Southwest and northern Mexico. The boundary between very moist air and very dry air often serves as a focal point for severe weather when low pressure systems pass through. 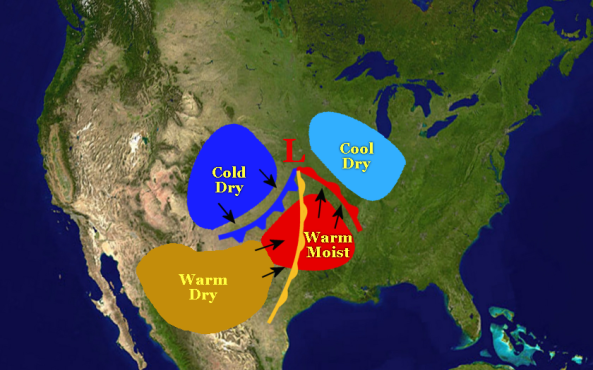